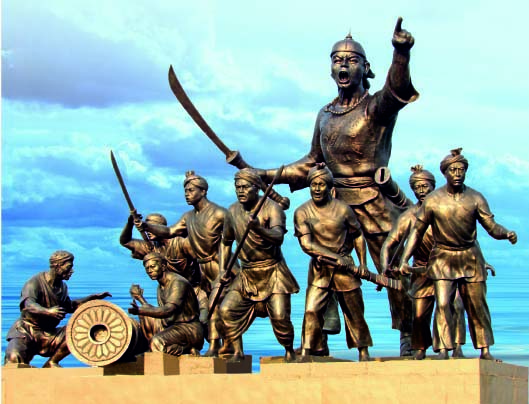 Battle of Saraighat – Part I

The Land of Assam where the Battle of Saraighat famously known as Saraighat war took place, on whose lap rests the mighty Brahmaputra, and whose bosom gave birth to the valorous and courageous Ahom Kings.

This was a kingdom that had resisted almost every invasion attempt and had maintained its sovereignty for almost 600 years. It had a long list of proud and honorable Kings under which Assam had flourished. But like every Empire, there descended Black clouds of the enemy, an enemy that was more powerful than every enemy the Ahoms had faced.

As soon as the baton of Kingship was passed from King Pratap Singha to King Jayadhwaj Singha at around 1648. Jayadhwaj reclaimed kamrup, which was under Mughal control.

His successor Chakradwaj Singha, vowed to regain the honor of the Ahoms, and began a complete overhaul of the kingdom. It was during this time that Lachit was made the commander of the Army, which was undergoing a total restructuring. The alliances were renewed with the Jaintia and Kachari kingdoms and in August 1667, Lachit accompanied by Atan Burhagohain, undertook a downstream expedition on Brahmaputra, to retake Gauhati. In the honour, he was presented with the Hengdang a gold plated sword.

And the foundations of the Battle of Saraighat or Saraighat War which would be won single handedly by a Hindu hero called Lachit Borphukan under the most extreme circumstances.

Lachit Borphukhan, was born to Momai Tamuli Borbarua, the commander in chief of the Ahom army during the reign of Pratap Singha, the Ahom king, also known as Sushengpaa, whose reign saw the expansion of the Ahom kingdom and was also regarded as a great administrator. Lachit Borphukan, assam’s own Shivaji and Rana Pratap well educated in humanities, military skills and scriptures. Lachit Borphukan would however be come to known due to his valor in the Battle of Saraighat, one of the worst defeats the Mughal Army would ever face. Saraighat would be remembered for the victory of a much smaller Ahom army over the mighty Mughal Army, through a combination of tactical brilliance, guerilla warfare and intelligence gathering. In a sense Saraighat would be the last attempt by the Mughals to extend their empire into Assam.

Making Kaliabor his base camp, Lachit ensured Bahbari was retaken in Sept 1667, while the entire region between Gauhati and Kapili river too was reconquered. Gauhati was attacked from the river banks, and the Shah Buruz, Rangamahal forts were occupied. On Nov 4, 1667 Itakhuli was taken in a daring mid night assault by the Ahoms, and many of it’s defenders were massacred. The Ahoms went in hot pursuit of the Mughal forces, Firuz Khan, the faujdar of Gauhati was taken as prisoner, and with the help of river warfare, removed the Mughals from Umananda and Barhat. Aurangzeb, sent a huge army under the command of Raja Ram Singh son of the Amber Raja, Mirza Raja Jai Singh to retake Gauhati. By February 1669, Ram Singh reached Rangamati, accompanied by Rashid Khan and the Sikhs under Guru Tegh Bahadur. It was a massive army with 4000 troopers, 30,000 infantry men, 21 Rajput chiefs with their contingents, 18,000 cavalry, 2000 archers and 40 ships. On getting wind of the information Lachit broke down, wondering how the Ahom kingdom could withstand the assault of such a mighty army. In addition the forces of Koch Bihar too joined the ranks, making the Ahoms virtually outnumbered.

And once again in history the sons of Mother India were thirsting for each other’s blood for the interest of the Islamic invader. Lachit Borphukan when he looked at the Mughal Army, initially, was shaken to the core. Lachit knew that on an open field his Army was heavily outnumbered by the Mughals and therefore he used the hills and the Brahmaputra in his military tactics to tackle the huge Mughal army. The Ahoms along with their allies, the Nagas, the Garos, Jaintia, Raja of Rani held their positions.

We will continue this discussion in the later part of this article. Stay tuned. History itself has lots to offer for us to learn upon.