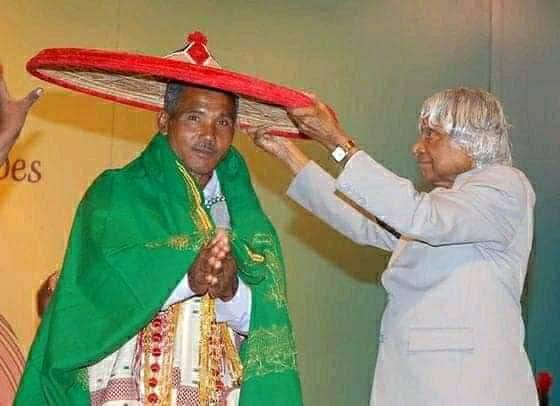 Just imagine having your own forest!! Yes! We can only imagine but there are some like Jadav Molai Payeng who not only imagine but do know how to do it. He has an entire forest upon his name (LIKE WHAT) and we are going to learn how he achieved this miracle, which we know, cannot be excused with less work and more play.

Jadav Molai Payeng is a Jorhat born Mising (a tribe of Assam) individual who has lived his entire life being a forester. Being a forester, his love for nature and especially forest was undeniable. He works at Majuli and is now the bearer of the title “The Forest Man of India” for his creation-‘Molai Forest’. He earned this honor for his marvelous work at creating a forest by planting trees and taking care of it until one fine day at an area of 1,360 acres sandbar of the mighty river Brahmaputra.

During the year 1979, Payeng who is the forest man of India started working for his own homeland (Majuli) after a shattering flood wiped away many snakes and laid them dead on the bank of the river. This made him realise that it was his responsibility to do something about it and started to plant saplings or seeds on a regular basis.

Molai being a forest enthusiast didn’t stop working even after that and planted even more trees (including trees such as valcol, ejar, arjuna, goldmohur, moj, himolu, bamboo, koroi etc.) and tended to them to convert the land into a forest that now works as a shelter to many wildlife such as the pride of India and Northeast- The Rhinoceros, The Bengal Tigers, more than 100’s of rabbits and deer and varieties of birds and insects. Astonishingly, there is also a herd of elephants that consists of approximately 100 numbers who visit every season and stay for at least six months duration and then migrate back to their original land. The name of the forest has been kept after Jadav Molai Pegu’s middle name ‘Molai’ and is located near Golaghat, Assam’s village named Kokilamukh.

What makes Molai forest one of a kind is that it is man-made and most importantly made with love. When love touches something, it becomes priceless. Everything that belongs there is a boon that was granted by the sweat and hard work of the forest man of India.

But nothing comes without any struggle. He had to also protect the animals from poachers by informing

Jadav Payeng has been honoured with many awards, the highest of which is Padma Shri in the year 2015. He has also received a doctorate degree for all of his contributions as a forester from Assam Agricultural Department and Kaziranga University, Assam.  He and his work have also been documented in various documentaries like ‘The Foresting Life’ by Aarti Shrivastava and ‘The Forest Man’ by William Douglas McMaster both in the year 2013.

He had also been seen at Ted Talk show, Bangalore where he inspired and will continue to do so to many young and old to bring a change in this world even if it takes 40-50 years to complete the task. Change is inevitable if you have the will to make it.

Payeng’s virtue was to see a new beginning for the living beings at Majuli who were dying in the scorching heat. He thought that the future should be seeing a new dawn and breathing in the fresh wind if they are to live a healthy and sustainable life ahead.

How a man created a dense forest is notable not only to the people of Assam but India as a whole. And we are not just to wait and praise but learn and grow from this. Grow Green!