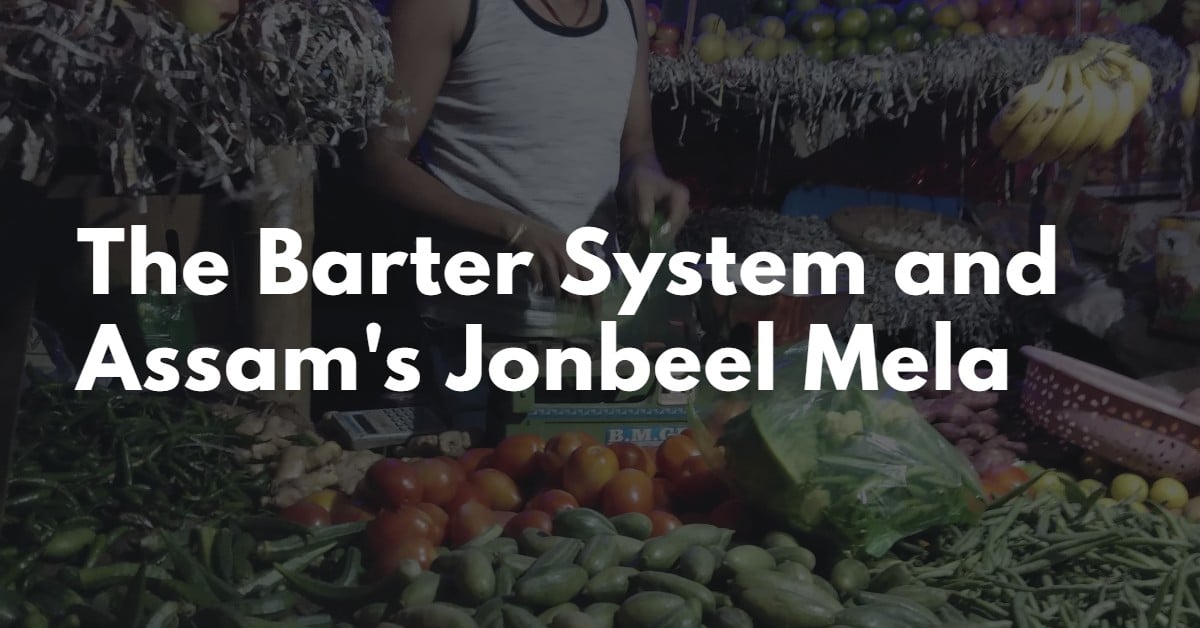 In an era of crypto currencies and cashless transactions, there still exists a tradition where exchange of goods for goods comes live! Known for being one of the most unique festival in Assam , Jonbeel Mela is arguably the only fair of its kind in India, with its existence dating back to 15th century

Jonbeel Mela, the traditional 3-day long fair of Tiwa Community is held at Dayang Belguri in Jonbeel, situated 60Kms from Guwahati in Morigaon district is known for following Barter System as a means of. The festival- Joonbeel (Joon meaning moon and beel meaning wetland) derives its name from the large moon shaped water body that flows across the area.

Organized in the weekend after Magh Bihu in January month, this fair is a meeting point for all neighboring hill and plain tribes to promote trade, harmony, and brotherhood. This is also a time for the kings of these two tribes to discuss their political matters. Traditionally the fair is inaugurated with hoisting of flag by the king, Gobha Roja followed by community fishing in the river. This very lively and vibrant festival includes traditional dances, community singing and many exciting sports including cockfights by the tribal communities

During the 3-day festival, fresh farm produces, traditional handloom and poultry are on display by the tribes each exchanged only with goods of similar value. The tribes from each community bring their harvest and produced to the mela by early morning hours. Within a few hours, children and elderly from all age groups are seen rushing from shop to shop. Although now all varieties of food are available equally between hills and plains, traditionally this festival was an opportunity between the tribes in hills to sell their unique produces (vegetables, fruits and berries) with the produces in plains (rice, flours, rye) and vice versa. It is a common sight to see rice flour or beaten rice exchanged with turmeric or fresh vegetables between the communities. Traditionally, the items exchanged between two parties were decided mutually without use of any measurements or weighing scales

The festival would let you witness a large variety of unique vegetables, sweets, pithas and farm produce. The furniture bazaar has its special attraction with some of most unique handlooms , handmade furniture and clothes including traditional mekhela sador on display. Nearly 40 thousand people including foreigners come every year to experience this unique festival of Assam.

With Magh Bihu round the corner, it can be an exciting plan to visit this unique festival and experience the age old barter system !

Up For Sikkim Tour This Summer

Travel plans?? Why not? The summer has sneaked into our lives and is playing its game to make us miss winters more! But why aren’t ... Read More

With the rise in anxiety and work, there is a drop in sleep these days and all we keep looking for is home remedies for ... Read More

What is the one thing you think is not nice about being a human being of such a kind who bleeds every month? My personal ... Read More

Health Benefits Of Mushroom And Some Easy Mushroom Recipes

A hot bowl of thick mushroom soup, with some extra black pepper, beside the fireplace, some slow music and the winter evening flows! Yes, the ... Read More