It was a lazy afternoon,
The curtains were responding to the breeze languidly.
I stood in tranquil near the window.
Gazing absent-mindedly to the blue sky.
My concentration was splintered,
As I could hear someone, separating the aperture of our old garage.
Breaking the tranquility,
I ran.
Oh,it was Bujo.
Bujo was busy harrowing mud,searching his lost biscuit.
The garage lied deserted,
in the backyard of our house.
This was perhaps the only memory of Deuta,
After the radio,
Maa didn’t loved to preserve nor she cared.
Once I carried the radio,
All the way from the storeroom.
To inquire Maa about it.
She replied me with a slap,
After which I cried for two long hours.
It was only Aaita who responded to all my questions.
Questions I had been pondering since ages.

Aaita told me,
How the radio was once Maa’s favourite.
And how she helped Deuta to clean up the garage.
Aaita also told me how,
The dark night changed everything.
Thunderstorms,lightning and the radio,
Were the only chaperones,
Maa and Deuta had on their long journey.
And how they met with an accident.
Aaita recalled,
Once Maa told her how that night
The radio played beautiful songs
Distracting Deuta with his controls on the steering.
From then onwards,
Maa closed the aperture of the garage and threw the cursed radio in the storeroom.

Suddenly I could feel something cold,
Oh,it was again Bujo
Licking my dirty feet.
I returned to my room,
Back again gazing the blue sky,
But this time I was not absent minded.
I questioned myself
‘Was the radio cursed?’ 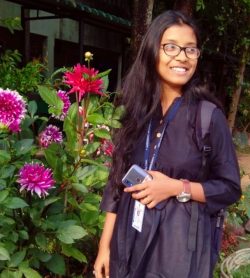